Home Conferences The People of Kid U!

The People of Kid U!

This is the first of a series on our Kid U 2008 Celebration Conference. (next)

The greatest highlight of Kid U is the PEOPLE who come. As one of our feedback forms said:

Coming to the Kidology University was like coming to a family reunion even though it was my first time attending. I will be back! – Heather Marshall

There is just something unique about the feel of a Kid U, and it’s hard to describe – you have to experience it. One example would be how Josh Kornberg became a highlight of the conference. 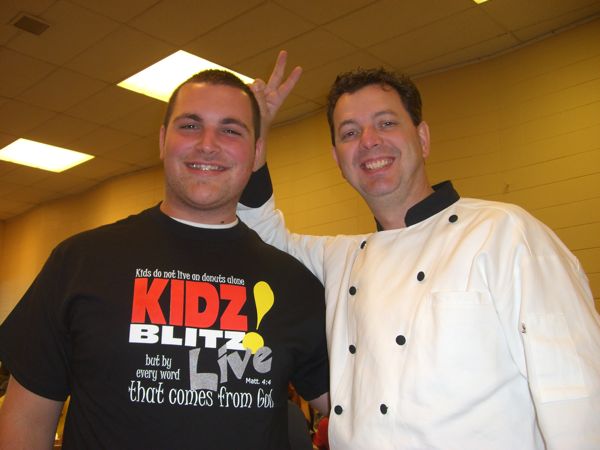 Who is Josh? Well, according to children’s pastor Kenny Conley who Twittered me that the following:

Karl, I’m sending an ambassador in my name to meet you at Kidology U. His name is Josh Kornberg. He’s 18 and he was a summer intern for me this summer, was a kid in my ministry many moons ago. And believe me, he WILL be making a mark in this world in the area of Children’s Ministry… someone to keep an eye on. Do me a favor though. When he introduces himself (Josh Kornberg) can you make a big deal out of it? You and Kidology are a big deal to him. Thanks!

Kidology is all about encouraging those who are just beginning to minister to kids and who are passionate about it! So when I met Josh, I announced to the entire lunch and exhibit hall, “Ladies and Gentleman, this is Josh Kornberg, and I have it on good authority that he is a young man to keep an eye on, one who is going to make a difference in the world for kids!” 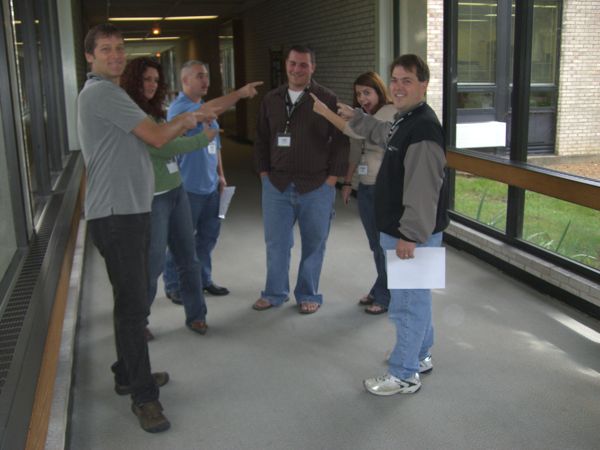 Then, every time I saw him, I had everyone clap for him! I even started chants, “Give me a J! Give me an O!” etc. It was fun to see his reaction. He was one of the stars of Kid U, and even got some special attention during the Kidz Blitz event when he accidently let a donut fall on the floor. This is how he was punished:

We were excited to have people from all over the United States at this event – more than ever before as we marketed nationwide for this 10th annual event. But we were especially excited to have a few international attendees as well who came for the entire event, Wednesday Celebration Banquet through Saturday! 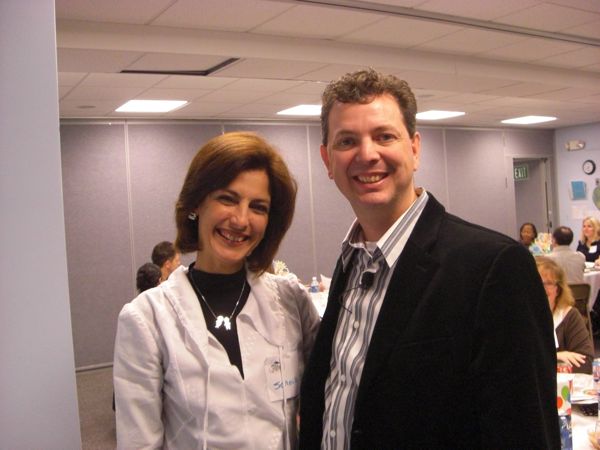 Here I am with Scheila Avellar from Brazil! 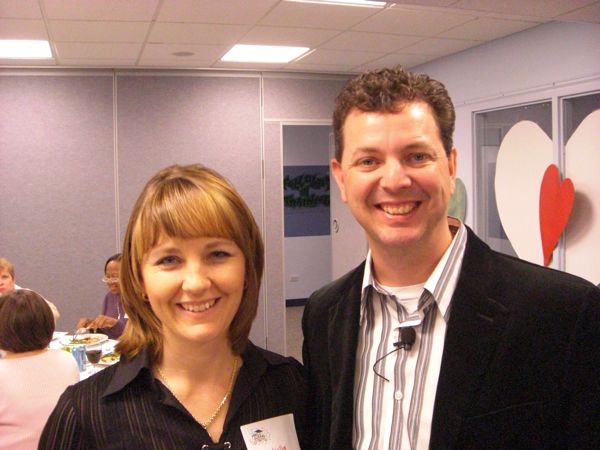 and Michelle Strasser from Switzerland! She even brought me some Swiss Chocolate and the first few chapters of The Order of the Ancient which she is translating into German for me! 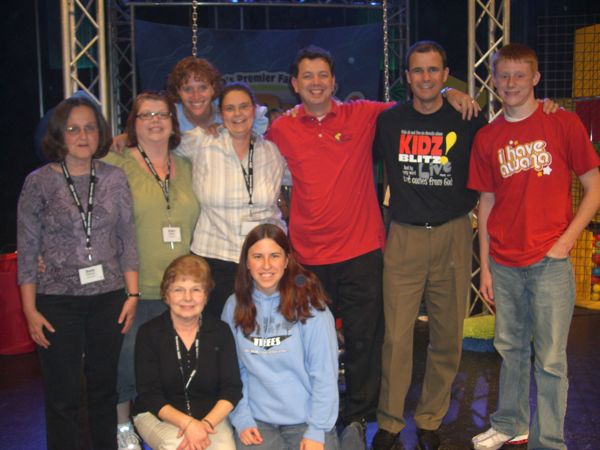 While I was disappointed that former CP Team member Frank Tan was unable to come to Kid U, I was excited to meet his team that he sent all the way from Oregon in his place! Hey, if you can’t come to Kid U, the next best thing is to send your team! In fact, I don’t think I’ve ever known a CP to send the team even when they couldn’t come themself. What a gift! 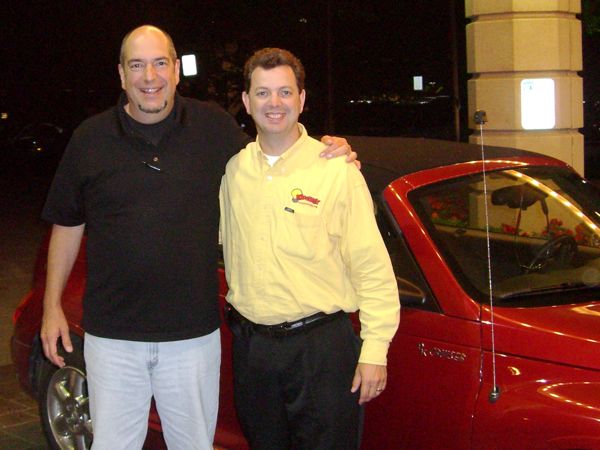 Another person that added a wonderful spirit to Kid U was Alan Root. Alan is a guy I’ve seen around children’s ministry conferences for years but never had the chance to get to know. Boy, have I been missing out! Here is a guy who loves the Lord, loves kids, and his positive and fun outlook on life just rubs off on everyone who comes near. We will definitely be having him back at future Kidology events! I think I finally met someone as good at puns as my dad… almost. 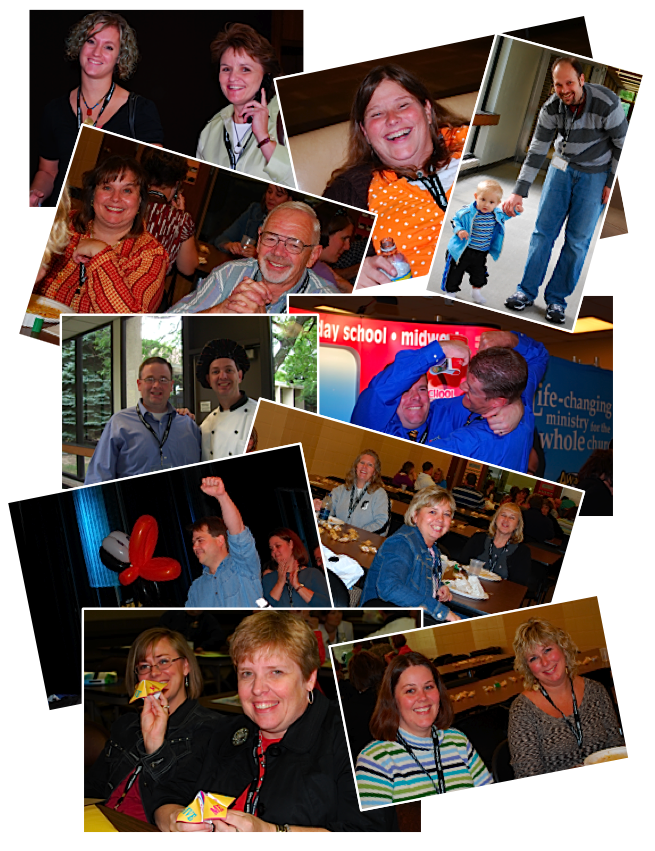 I can’t even share all the snap shots that I’m enjoying going through now that Kid U is over. And while I’ll be blogging more pictures and more details from this historic Kid U event, I had to START by telling you about some of the PEOPLE who attended. No matter how great the trainers are, no matter how exciting the performers are, no matter how helpful the exhibitors are, it is the PEOPLE WHO ATTEND Kid U that make it such a wonderful event. If you have never been to a Kid U, you truly are missing out!