Dad School – In the Snow? Today it was pretty cold… and snowy, and when it came time for Dad School, I could tell my son would rather be outside playing in the snow than working on his alphabet.

Combine School and Snow together, of course!

I had to shovel the driveway eventually today anyway – might as well use it as an educational opportunity, and as I like to say, “Kill two stones with one bird!”

We bundled up and headed outside and worked on our letters, in the snow. Granted, we wouldn’t last long in the cold – but we had a great time. (My back might argue that last statement!)

(Contest is over, but it was FUN!) Can you name the letters we worked on today? See how many of the letters you can name in COMMENTS. First person to name ALL FOUR correctly, WINS! NAME ALL FOUR LETTERS in Comments…

This was a blast! (and quite crazy!) I had no idea I would get such a response, and it was very confusing to go between the blog comments and facebook comments – but the results are in!

Picture 1 is obvious a LITTLE “d” – capital D would not do. Sorry.

Picture 2 is is a LITTLE “f” – some guessed F, but missed the curve at the top.

Picture 3 is a LITTLE “g” – most got this, but a few capitalized again. (oops)

Picture 4 admittedly, was the killer. I had Luke lay in it and form the letter as the hint. It was the Letter “T” – capital. The only capital. Granted, he kept moving and doing a snow angel, so his form is a little off, but since it wasn’t the only letter people missed, I think it’s fair.

Krista Mobley is the Facebook winner! Though it took her several attempts and a few tips from me to get it right in the whee hours last night. But she finally pulled it off. But, I’m a little biased toward her. But I didn’t help her any more than I did anyone else!

Doug Olson is my Blog Winner! Technically, I could disqualify the Facebook commenters since the rules said to use blog comments! Anyway, Doug’s a good friend and a great encourager, so I was glad to wake up this morning and see he nailed it.

BONUS WINNER: (I’m just such a nice guy!) As I was updating this page another winner squeaked in! Dawna Lunde posted the correct answer via Facebook!

WHAT DO THEY WIN? 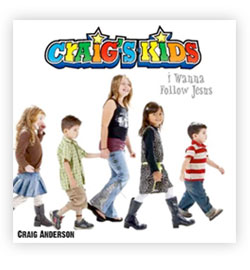 All these smart and lucky winners need to do is contact me via facebook and they will get a free download of one of Luke’s favorite albums.

It’s called Craig’s Kids and not only does Luke love it, but I really enjoy it too!

You can hear a sampler of it on the product page on Kidology. I think every Christian Kid in America should be listening to this CD! This is one of those CDs that is just jam-packed with great music and even better lyrics that kids need to be packing into their hearts and minds. I just can’t recommend it enough. My favorites are “I Wonder Why” and for fun “Rolley Polley” but every single song is just excellent.

If you weren’t a winner, I’ll make you a winner: Just enter code SNOW and get 10% off any Craig’s Kids product on Kidology! (Expires one year from today!)