Home Adventures The Force is With Me!

The Force is With Me! 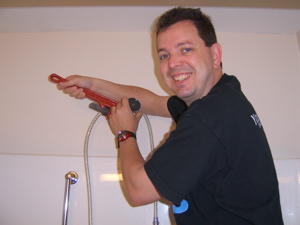 Right after I repair the shower myself in the hotel.
(The maintanence guy called off sick,
no doubt, he was sneaking off to the convention!) 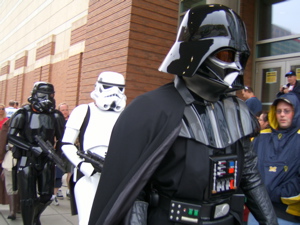 Soon we were meeting Imperial Forces!

We left around 8 am and headed to the convention center in downtown Indy. Since we are official ‘fan club’ members, we have the opportunity to get in one hour early. (yeah, right!) 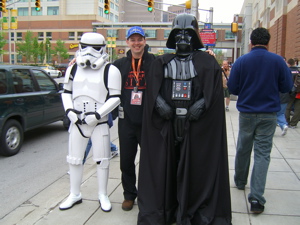 And posing for pictures with them.

The doors supposedly opened at noon (for fan club members) so we decided to get in line three hours early – and were already HUNDREDS (if not thousands) of people behind in a line that wrapped around the convention center, went up stairs, and finally went into a Disneyland on Steroids snaking pattern. 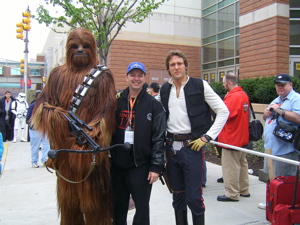 Met a few Rebels too!

The guy next to us, Ivan, knew more about Star Wars than George Lucas, so we definately learned a lot! It was fun to see all the costumed characters. Where is my costume? I decided not to wear it today so I could focus on learning the ‘lay of the land’ get the collectibles I’m after… I plan to wear it tomorrow. 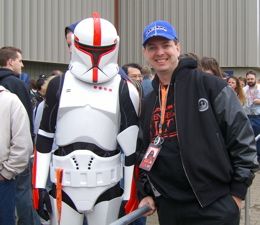 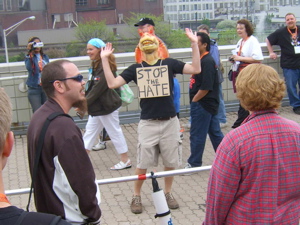 This was the most creative costume! 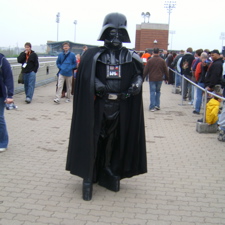 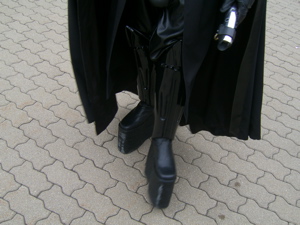 I guess he was a little short for a Sith Lord! 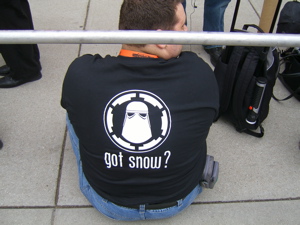 Fun to see all the different shirts. 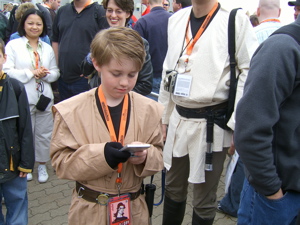 Many young Jedi and many Game Boys!
(that’s how I passed hours too!) 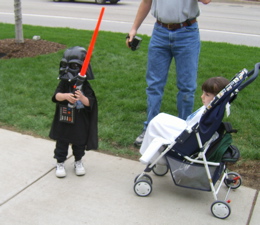 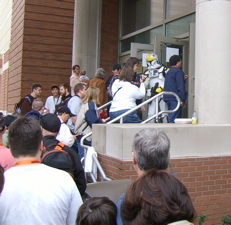 Finally, the Troopers let us in!

The line didn’t even move until 12:45pm and by 1:30pm (a hour and a half AFTER the ‘fan club gets in early’ time) we were inside, only to be in the Celebration Store line. Finally, around 12:30 pm Sara suggested I give her a list of what I wanted from the convention store and go check out some of the other stuff. (What a wife! WHAT a wife!!) Little did I know then that I would not see her again until after 6pm! I was not allowed back into the store room, even though my wife had not sat down, eaten, or ‘powered her nose’ since 8am!! In the end, she had been in line over 9 hours!I did get to go around the Exhibit Hall and see a show called the One Man Star Wars Trilogy, which was HYSTERICAL and worth the whole convention entrance fee! It was the best!

There are a TON more pictures, but I need to get to SLEEP… so pictures from inside and other adventures will be coming along later, and at the end of the week – a full gallery of all my pictures from the convention! 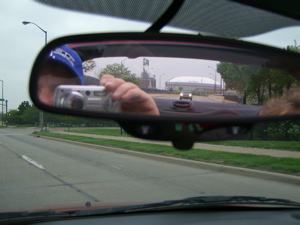 Heading home, the RCA Dome and Convention Center behind us!