A Magical Trip to California…. 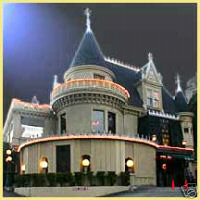 This week I had the distinct privilege of getting to travel to California and speak/perform at the Magic Castle in Hollywood as a guest speaker for the Southern California chapter of the Fellowship of Christian Magicians.

For those who are not familiar with the Magic Castle, as stated on it’s website,

The Magic Castle is the private clubhouse for the Academy of Magical Arts, a very special organization devoted to the advancement of the ancient art of magic. The purpose of The Academy is to encourage and promote public interest in the art of magic, with particular emphasis on preserving its history as an art form, entertainment medium, and hobby. Beginning with a charter membership of 150, the Academy has grown into a world-renowned fraternal organization with a membership of nearly 5,000.

The Magic Castle is known to magicians all over the world as the premier magic venue and the virtual center of the magician’s universe. It is an authentic Victorian mansion, built in 1908 in the hills above Hollywood, and has been the “Magic Castle” for over thirty years. While I have been to the Castle many times as a guest of members, it was an extra special treat to be invited by FCM to perform and speak. (You must be a member or have an invitation from a member to get in. I have been invited to be a member but it is super expensive annually to join (!), and I only get out to California a few times a year, so I skip on the membership and get one of my member friends to get me in!) 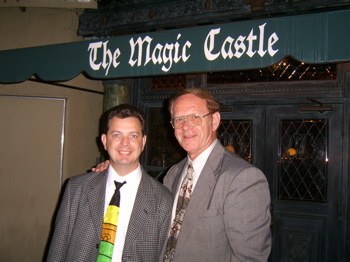 This is Barney Kinard, the Kidhelper, who is the leader of this local chapter of FCM and who invited me to come speak. He has been doing Gospel magic for forty some years and was one of the magicians who inspired me as a kid when he did some Gospel magic tricks as part of the VBS program he did at my church when I was ten years old. 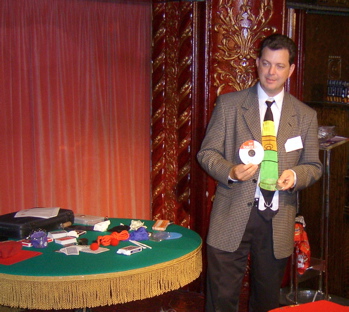 While I am mostly known for my children’s programs and stage illusions (levitating, guilotine, sub trunk, etc.) my personal favorite is and always has been close up magic. My workshop was titled: Pocket Prestidigitation that Packs a Powerful Punch! (nice alliteration, huh?) 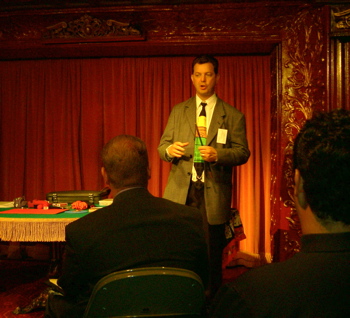 Like many college students, when I was in Bible college (at MBI), I found myself in need of money to pay my school bill! One day I saw a magician performing on Rush Street (at Clark) and saw he had a hat full of money. (!!!) Hmmmmm, I could do that! So I got myself the black fedora that I still wear when I perform, and headed down to Michigan Avenue. 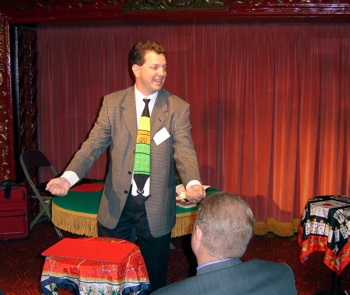 The Neiman Marcus building on Michigan Avenue (at Chicago Ave, just South of Water Tower) became my stage. I would head down there around 9 p.m. and by midnight I had several hundred dollars in my hat! In fact, I had to open a bank account at the First Chicago Bank right across the street so I could deposit the money asap and not get mugged on the walk back to Moody. (That branch is now gone, but I am still at the same bank, changed from First Chicago to Bank One and now to Chase) Eventually, I was ‘discovered’ on Michigan Ave. and got an agent who began to book me for walk around magic at corporate parties and I became the ‘house magician’ at several downtown restaurants included the Rock n/ Roll McDonald’s, D.B. Kaplin’s (then in Water Tower), and Boogies Diner in the Bloomingdale’s Building among others. Doing celebrity events, such as Chicago ball team parties and celebrity birthday parties were fun too. I actually miss the close up magic gigs, and eventually (when I am old) plan to return to being a house magician somewhere – that was my favorite type of magic going table to table, quickly accessing the type of people, humor, (and sometimes sobriety!) and then entertaining. 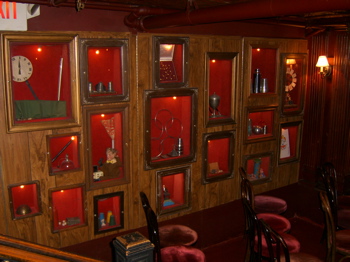 Back to the Castle, the place is like a magic museum, filled with displays, posters, props, and lots of fun stuff. It is not an entirely ‘Christian’ environment, but it is fascinating! 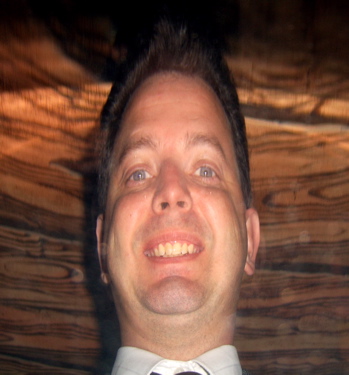 In a lower ‘dungeon’ passage way there was a magic mirror – so I took my picture in it. There is a lot of cool stuff, but I reallly don’t want to put pictures of it all up – it would spoil it – you have to go there yourself and experience it. 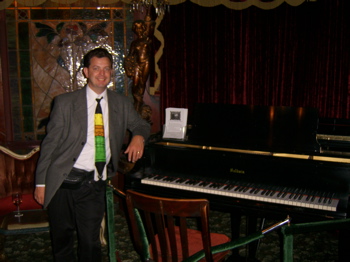 This is Irma – the friendly ghost of the mansion. (You can’t see her, but she is sitting at the piano) If you don’t believe in ghosts, just ask her to play ANYTHING and it will myseriously start to play. Think it is just a player piano? She will even interact with you, playing funny notes to answer questions. And if you try to leave the room, she will stop. I was stepping in and out of the room and she was stopping and starting to play as soon as I entered or left – it was pretty funny. 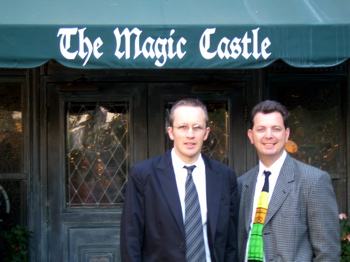 One treat was that my good friend Pastor Ryan Frank from Indiana happened to be in California on vacation so I brought him as my guest. Bummer. Now he knows all my secrets! 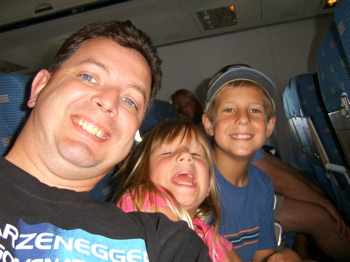 The main point of my workshop was on how to use ‘pocket magic’ to get to know kids and entertain them. Magic interests everyone and is a great tool for meeting people and beyond the entertainment value is the relational value. These are two kids that I met on the plane on my way to California. I rarely get to sit by kids, so this was a treat for me as well as them – and they got a bigger on flight magic show than most kids, since I was loaded for this workshop. They even got to see me levitate a dollar right there on the plane! (You should have seen the looks on the faces of the people walking down the aisle!) 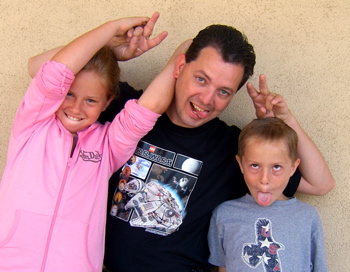 But, of course, the highlight of the trip wasn’t speaking or performing at the Magic Castle – it was getting to see my awesome neice and nephew and hang with them for a few days. :)