Life Lessons from a Game Boy! 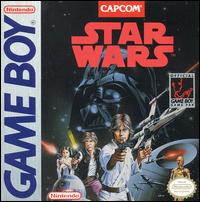 In the little free time I’ve had lately, I’ve been working on becoming a Jedi in my Star Wars Jedi GameBoy game. You get to be Luke and travel through the three original classic SW movies – I’m on the Moon of Endor now. (Only bummer is, it won’t let me kill ewoks with my light saber, like they are invincible – oh, yeah, they are on MY side!)

The hardest part was getting out of Jabba’s Palace! I was on the same level for DAYS – there was this point where an insane amount of Gamorrean Guards would attack, all throwing axes at me – and no amount of force powers could get me through! I would super run, super jump, force push, even the double flip with saber flying, but they would eventually wear me down and my little Luke would drop to his knees, doubled over, hands holding his stomach like he got food poisoning, EVERY time.

I finally stooped to asking a kid for help but I couldn’t decipher his advice, he just kept saying, “After you walk in…” and commented on how easy that level was. FInally, I realized he said, “when I WALKED in…” AH HA! I discovered why it had been much easier for him – he entered that area of the palace as a kid would, slowly and cautiously, not as an over-confident grown up wanna-be Jedi!

The secret – when I entered that area SLOWLY, (instead of flying in with a force-powered super speedy flip action saber flying leap) the guards all came at me one at a time, and were easy defeated one at a time, and ironically, they didn’t even throw their axes at me!

THE POINT? (alas, everything in my life is an object lesson) Sometimes we charge into life, and all our TO-DO’s and activities overwhelm us and quickly we become overcome by stress and activity and find ourselves defeated and having to start over and over and over again. I was reminded to just move ahead slowly and tackle things one at a time, and I’ve also found that less axes are thrown my way when I go at a slow but steady pace. Thanks to a second grader and a Game Boy for that lesson of life.

May the Force be with you,