Last night in youth group, our Youth Intern, Josh, introduced a super fun game! I have no idea where he got it, or if he made it up – but it was a blast! 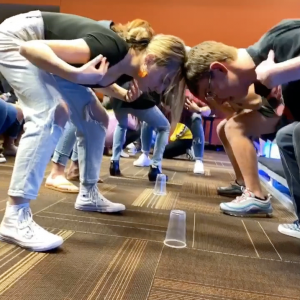 It is an elimination game! Kids pair up head to head, if an odd number, either grab a leader or that student waits until the next round.

The students face off with a plastic cup on the ground between them, placed upside down. The leader calls out body parts and the players have move their hands to that spot – head, knees, toes, eyes, nose, etc.

BUT when they say “CUP!” the pair each try to grab the cup. If they grab it, they remain in the game. The other player is “out” for the rest of the round.

ALSO – if a student touches the cup when “CUP” was not called, they are immediately out! So they need to listen carefully and the leader attempts to trick them into lunging toward to the cup!

Here is a quick video of the game in action!

HAVE FUN! (and have lots of cups on hand!)