Most likely, not many of you are subscribers to YFC Alumni News, but if you were, you’d have seen Kidology Coaching‘s Barney Kinard featured! Here is the article in full, including a perhaps never-before-seen picture of Barney as a young student!

From Preacher Boy to Preacher to Boys and Girls: Barney Kinard’s Story 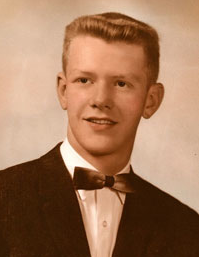 In the fall of 1960, I entered a Preacher-Boy Contest sponsored by Youth for Christ in Denver, Colorado, under the leadership of Jim Groen. I did not win the contest, but God used that experience the next day to call me into the ministry to preach the word.

After graduation from Littleton High School I began my preparation for ministry by attending Moody Bible Institute. Upon graduation in 1964, I attended Biola University and then graduated from Azusa Pacific University in 1966. Graduate work began at Talbot Theological Seminary and graduation followed from Fuller Theological Seminary in 1972. After ordination, in 1972, I became the itinerant Children’s Evangelist with Creative Children’s Ministries out of Buena Park, CA, where currently I serve as CEO, President. My vision now is to creatively evangelize children and help others to do the same.

For over 38 years I have successfully been evangelizing children in crusades and rallies, training leaders, creating resources, writing and mentoring others in children’s ministry. The first 10 years of my ministry was in church-staff positions, all involving children. During the last ten years I have also been doing short-term missionary trips to reach children in other countries. I am a puppeteer, a gospel magician, a story teller and a master of object lessons. I have been working with dummies since 1972, while trying to add methods that would attract children in fun ways. I am a ventriloquist and have several vent figures. I love to train others to use these performing arts in their ministry.

My wife, Sharon, and I have been happily married for 43 years. We have four grown children, all married and active Christians, and eight precious grandchildren.

All this started from the YFC Preacher-Boy Contests in Denver, Colorado. I was active in this YFC program only in my senior year at Littleton High School. I was the YFC Club Vice President and was active on the Bible Quiz Team, which qualified us to go the Nationals at Winona Lake, Indiana, in the summer of 1961. Also I became the Club Coordinator for Chicagoland YFC, where I helped start new YFC clubs, under Dave Breeze, while attending Moody Bible Institute (1961-1962).

I remain grateful for the influence of YFC in my life, over 48 years later.