I am not one to toss around the words “favorite” or “best” lightly or often, so when I say that W. Bruce Cameron’s novel Emory’s Gift is my favorite novel, I mean it quite sincerely.

It is TRULY the best novel I have ever read. Never before have I laughed out loud reading a book, turned away from others lest they see my tears, or just cried boldly on a plane because I no longer cared if anyone saw my tears. I have read lines to strangers who had no idea what I was trying to express because they lacked the context, but I didn’t really care, because I just couldn’t keep that line or paragraph to myself. Cameron’s writing style and insight into the mind of a young boy is truly amazing, insightful, and downright hysterical at times.

Truly, I am Charlie Hall, the main character – a middle schooler, around whom the book revolves. And I miss him now like I lost a childhood friend I’ll never get to see again. So real did the author make him, and so vivid did he paint his memories, his experiences, his deep loves, such as Kate, a teacher he was convinced returned his love. (What boy hasn’t fallen head over heels for a teacher and pretended in his mind that it was mutual, even while he knew he was only kidding himself?) But eventually he found “true love” in Beth, a girl much closer to his age, who both befuddled and enchanted him with her spunk and charm.

Indeed, Cameron has written one of those rare novels where the greatest agony is not that the bear aspect of the story may or not be true, but rather the agony that Charlie Hall isn’t real. In the end, he hints at a conclusion the reader is perhaps to come to without directly telling it to him. It’s genius. I’ve never read a novel twice, but I will put this away only long enough to forget the details so that I can relive it. It might take several years, though, since I remember it as though I lived it. But when the time comes, I will journey with Charlie Hall again down memory lane.

Charlie is a boy who lost his mother to cancer and lives in a home with a nearly silent father who, while not a bad father, is withdrawn and dealing with his own grief while leaving Charlie to cope in his own way. An encounter with a wild grizzly bear in the woods that ends up becoming his best friend becomes central to the story – especially when the bear turns out to be perhaps more than just any bear. But I don’t want to include any spoilers, so I’ll leave the mystery of “Emory’s Gift” to those who are lucky enough to pick up a copy of the book.

Part of my connection to the book is that, like Charlie, I also lost my mother to cancer in 1996. It was also slow and painful. While I was a young adult at the time, my much younger brother was Charlie’s age, and he was still at home with an agonizing father. I saw a lot of my dad and brother in this story and in their journey toward moving on without the most loving mother this world has ever known. I am giving a copy of the book to my brother, an MLB reporter and writer who I think will greatly appreciate Cameron’s gift for storytelling. I believe it might bring some healing to his heart regarding the loss of his mom at that tender age and perhaps help him understand his dad a little better, who is now remarried and happy again. This book helped me heal some too.

I may have read somewhere that this is a book for children; however, I certainly would not recommend it for kids.* I do recommend it for the child in each of us, especially for grown men who remember the struggles of transitioning from childhood to manhood and the awkward inner (and literal!) battles they caused. Charlie’s former best friend Dan becomes a bit of an ‘enemy,’ even culminating in a classic school fight that is described both with heart and humor. It is certain to bring back many memories for men who faced the same coming of age battles in their younger years.

But it was the story of the bear that drew me to the book initially, for I encountered a bear at the age of ten, as well. My First Yosemite Black Bear as an Adult, 2008

I was camping in Yosemite National Park at the time. I love to sleep outside, and since my nylon sleeping bag kept slipping off the plastic folding cot in the night and I’d awake in the dirt, one night my dad devised a plan to bungee cord my sleeping bag to the cot. I awoke in the middle of the night to gentle nudging in my side. Thinking someone was trying to awaken me, I peeked and discovered a large black bear sniffing me! Terrified, I only stared at my “Emory,” wondering if I was a midnight snack. Unable to speak or move, I just froze and watched (and felt) as he continued to sniff me, gently nudging into me. I remembered Forest Ranger Nina (my Kate of the week) telling us that bears never attacked campers, but that they had mauled people just trying to get food. With that thought came the realization that I had some jolly ranchers in my pocket.

The bear’s nose went under my cot, and as its massive head vanished, so did my hope of survival. I figured my final memory would be the shadow of its body without the head, when suddenly the bear lurched up, flipping my cot. At that point I figured it was “flip and slash” so I broke my silence and screamed like a girl. No offense to girls, I mean it actually as a compliment! (Did I mention I was bungee corded to the cot?) As I landed face down in the dirt, the cot on my back, my dad came out of the Winnebago Camper to save some screaming girl and saw the bear lumbering back into the woods, jolly-rancher-less, and discovered the screaming girl was actually his ten-year-old son.

Like a grown Charlie Hall, I have become a bear hunter in Yosemite ever since. You can read of my first bear discovery here: A Prayer BEARly Answered (Bear pictured above.) 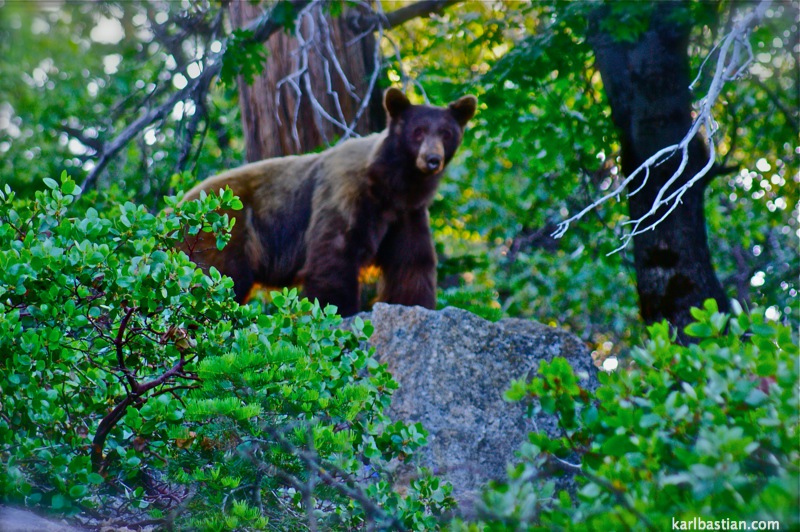 There are only 400 bears in Yosemite and over 5 million visitors annually, and every year God has blessed me with a bear sighting and the opportunity to photograph them. I have a series of photos now. I wonder, like grown Charlie Hall, if one of them is “my bear.” Of course, thirty years later, they can’t be…but its fun to wonder. 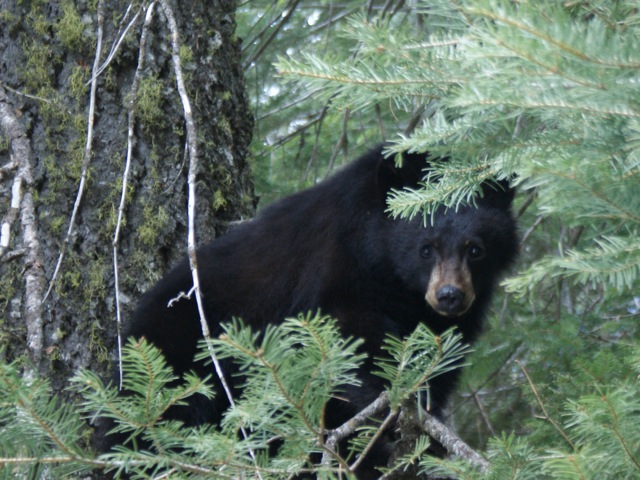 So you can imagine the special connection I had to Charlie Hall reading Cameron’s novel. 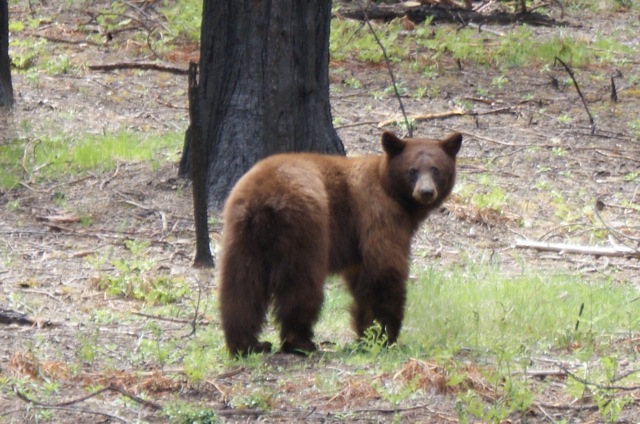 I hope Emory’s Gift causes many to pause and consider ‘mystery’ (for the book allows for mystery) and that the message that the book delivers (that I’m keeping from you to not spoil it) will open hearts to God. For parents, I hope that it will help them to connect better with their kids in difficult times, and  for others, that it will encourage them to seize life and not allow hurt and pain to hold them back from enjoying what is next in life, to not let their Beth get away, because there may not be a second chance for everyone. (slight spoiler, but it ends well!)

The author mailed me a stack of hard cover copies to sponsor my podcast where I talk about the book, and I’ll be giving several copies away there, but I’ll give away a THREE FREE COPIES here on my blog as well! All you have to do is COMMENT ON THIS REVIEW and tell me a story about YOU and an ANIMAL. I will choose three people at random and contact you for your address!

It doesn’t have to be as dangerous or exciting as mine – you fed your cat this morning is fine! Just tell me a true animal story and you will be entered to win!

I HIGHLY RECOMMEND that you pick up a copy of Emory’s Gift as a gift for someone you love, especially men, for birthdays, Christmas and this upcoming Father’s Day! They will thoroughly enjoy it!

*Why don’t I recommend the book for children? While I found nothing offensive in the book at all, as an adult, it is a book that reflects on life as a young boy becoming a man. Therefore, there are a few references to girls and women in that context from the perspective of a grown man reflecting back on his discovery of girls, their development, the beauty of women, and relating to both. There is one mild reference to sex that while a child might miss it, is there nonetheless. It is a reference to his dad having sex with a woman that he didn’t figure out until ‘years later’ but the reader puts it together because the reader is assumed to also now be older than Charlie and also reflecting on the situation. (The whispering and giggling in the other room when the women spends the night. They eventually marry.) I’m curious how a child reading a few of these passages would process them, being in the middle of those life changes and discoveries. It was delightful and fun, never really offensive, but read like a book for adults reminiscing over those difficult years of discovery.