(Found this in my drafts folder… I did not write it, but I thought the facts were still pertinent as we are in a presidential election season. National Security is the #1 issue. Without a nation, there are no other issues, and make no mistake, our total destruction, or at least our free way of life is under direct attack and our president cares more about preserving our nation than his reputation. That is a man of character and honor.) 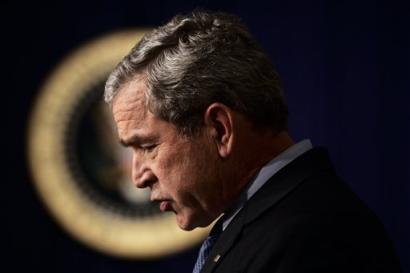 There were 39 combat related killings in Iraq in January. In the fair city of Detroit there were 35 murders in the month of January. That’s just one American city, about as deadly as the entire war-torn country of Iraq .

Many people say that President Bush shouldn’t have started this war, but they fail to realize that:

3) John F. Kennedy started the Vietnam conflict in 1962. But guess what? Vietnam never attacked us.

5) Clinton went to war in Bosnia without UN or French consent. What? Bosnia never attacked us? Nope. He was offered Osama bin Laden’s head on a platter three times by Sudan and did nothing. Osama has attacked us on multiple occasions.

In the years since terrorists attacked us , President Bush has liberated two countries, crushed the Taliban, crippled al-Qaida, put nuclear inspectors in Libya , Iran , and North Korea without firing a shot, and captured a terrorist who slaughtered 300,000 of his own people.

The Democrats are complaining about how long the war is taking. But:

It took less time to take Iraq than it took Janet Reno to take the Branch Davidian compound.
That was a 51-day operation.

We’ve been looking for evidence for chemical weapons in Iraq for less time than it took Hillary Clinton to find the Rose Law Firm billing records.

It took less time to take Iraq than it took to count the votes in Florida !!!!

Our Commander-In-Chief is doing a GREAT JOB!
The Military morale is high!
The biased media hopes we are too ignorant to realize the facts.

Hillary Clinton recently admitted that as President she would NOT pull the troops out… she goofed and showed her cards… the Democrats want to pain the war as a failure to get into power, so they can continue and win the war, and claim the credit. They won’t let the USA lose when they are in power, but right now they are rooting for the enemy… for political gain. Pathetic. How patriotic is a candidate that roots and assists the enemy in order to gain power? I will never vote for a candidate that needs American soliders to lose and die in order to further their political ambitions, but that is EXACTLY what is happening right now.

I watched a congressional hearing today on CSPAN2 and was shocked at the ignorance and right out lies stated by elected officials. How they got elected I have no idea.

War is ugly. Lost lives are tragic and heart breaking. But we didn’t start this war. But we will finish it.

And I will feel much better and our nation will be much safer, if someone supporting our President and our Troops is in power the next four years.

If you do not support the troops mission, you do NOT support the troops. it is UnAmerican to undermine our mission and troops. It’s a sad day in American when those fighting to keep us safe and undermined by the very ones they serving to protect.