Home Christianity If Angels Could Sing…

If Angels Could Sing…

Before you watch this incredible new video from Pentatonix, I’d like you to consider something.

A professor of mine in Bible college suggested an interesting theory he had about angels based on a textual study of the Bible’s original languages. 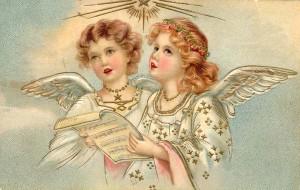 An interesting fact, that while we often talk about “angelic choirs” or say someone “sings like an angel,” nowhere in Scripture are angels ever recorded as singing. But often, the saints are and we are commanded to!

Keep in mind, this is a theory based on an argument from silence. So while we can’t say the Bible says “angels can’t sing,” – there is no evidence that they can in the original languages of the Bible. As Dr. James used to say, I will also say, “I sure hope they do! I bet they are amazing.” The point is simply that perhaps singing was a gift given uniquely to humans as a means of worship?

Note, in Job 38:7, states that on the first day of creation, the angels “shouted for joy.” Consider that the classic Christmas play scene of children dressed as singing angels (as adorable as it is) doesn’t match the biblical text where the angels were “praising God and saying ‘Glory to God in the highest.'” (Luke 2:13-14) Note in Rev. 4:8, “Day and night they never stop saying: “‘Holy, holy, holy is the Lord God Almighty,’ who was, and is, and is to come.” In verses 9-10 they say some more praise, and later chant “Worthy is the Lamb” in Revelation 5:12.

The point? Ultimately we don’t know if angels can actually sing. Of course, it will be wonderful if they can, though the Bible certainly could have recorded them singing instead of saying, shouting or chanting if they could indeed sing.

So when I watch something like this video, I can’t help but wonder if it could be that singing is a uniquely human gift, given to us for the very purpose of worship?

Note, finally, at the climatic scene of the Bible, toward the end Revelation where the people who had been saved sing!

Then I saw in heaven another marvelous event of great significance… I saw before me what seemed to be a glass sea mixed with fire. And on it stood all the people who had been victorious over the beast and his statue and the number representing his name. They were all holding harps that God had given them. And they were singing…

“Great and marvelous are your works,
O Lord God, the Almighty.
Just and true are your ways,
O King of the nations.
Who will not fear you, Lord,
and glorify your name?
For you alone are holy.
All nations will come and worship before you, for your righteous deeds have been revealed.”
(Revelation 15:1-4)

Perhaps you can sing and angels can’t! So sing boldly!

Sing the praises of the Lord, you his faithful people; praise his holy name. Psalm 30:4