Home Christianity The Gospel According to Darth Vader

The Gospel According to Darth Vader 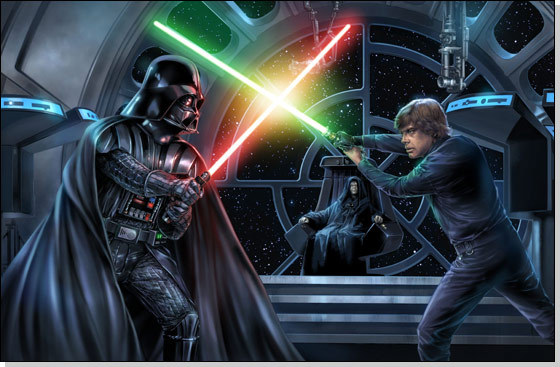 Followers of my blog know I’m a Star Wars fan. People often laugh when they hear me say to my son in a deep voice, “Luke, I am your father.” He laughs, even though he doesn’t get the significance of the quote. Since he is only six, he hasn’t even sat through all the movies, though we have watched segments and he loves the original Clone Wars cartoons I have on my iPad before the freaky looking version came out that looks like a video game gone bad. (I’m not a fan of the current Clone Wars show – yuck!)

Tonight, Luke had trouble sleeping so he was lying on the couch down in my office while I worked and looking at all the items in my Star Wars ‘museum’ – and noticed I have a lot of Darth Vader figures and collectibles and asked, “Why do you like Darth Vader so much, when he is a bad guy?” Good question. I answered, “Luke, Darth Vader is the reason I love Star Wars so much – because Star Wars is a story of a bad guy who was saved because of the love of a son, a son named Luke.” 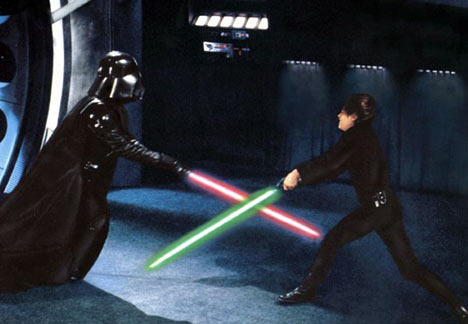 My Luke sat up. “Wait, you mean, THAT’s Luke’s father?” – and so the conversation began. It wasn’t that he didn’t know I’d always been immitating Darth Vader – but it kinda hit him that the bad guy was the good guy’s dad. I explained that Luke was separated from his dad when he was little, and he was told that Darth Vader killed his dad, so he hated Darth Vader. I went through a quick summary whole first movie, saving the princess and all, and how he watched as Darth Vader then killed his mentor Obiwon, and that made Luke hate him even more. And how in the next movie Yoda was training him to become a Jedi so he could fight Darth Vader but when his enemy captured his friends he ran off to save them, and battled him and it was only then that Darth Vader told him this incredible truth – that he didn’t kill Luke’s dad, he WAS Luke’s dad. My son was spell bound. We talked about how all of America was talking about this revelation when in happened in 1980. (Not until The Sixth Sense did a movie have such a great surprise, and this was still bigger.)

But then we talked about how Luke had every reason to despise or hate his father, but instead he chose to love him and feel pity for him. He even told his dad so. Even when his dad stopped believing in himself – “It is too late for me, son” – Luke never gave up on him! Luke even gave himself up in the third movie and let himself be captured to go and face Darth Vader and his even more evil boss, the Emperor! (Now Luke was on the edge of the couch.) There, the Emperor told him of the trap that would kill all his friends and that Luke would have to join the evil side, like his dad, or be destroyed. The Emperor wanted Luke to kill his own father. But Luke refused. He loved his dad, even though he had done so much bad. He refused to fight him – only defending himself as his father attacked him under the Emperors orders. But then Darth Vader got Luke angry. He told Luke if he didn’t turn to evil, he would go after Luke’s sister, and that got Luke upset and then Luke attacked Darth Vader to save his sister – he defeated Darth Vader and even cut off his hand to make his light saber fall away! Darth Vader was defenseless! Now Luke could have killed him if he wanted. Did Luke do it? No. He was good. The Emperor ordered him to kill his father and take his place – but Luke did the most amazing thing, he threw down his light saber and said, “I am a Jedi, like my father before me.” He spoke of his father like he was good. He spoke of the time when his father was a good Jedi, of the time when his father would have died to do the right thing, and chose now to die doing the right thing, as his father would have done long ago. He wanted his dad to see that he had raised a good son, willing to die for good, even though he himself had failed, he had succeeded in having a good son, a son willing to die for him. 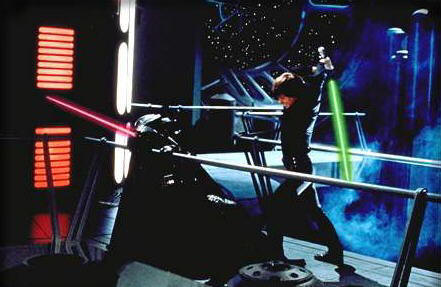 I asked my son, “Would you die for an evil man?” My Luke said, “No way. I might die for a good person, but not for a bad guy.” And I said, “That is the whole point! The Bible says that a man might die for a good person, but no one would die for a bad person, but here Luke is willing to die for his father who is one of the worst men in the galaxy, the second in the command of the evil galactic Empire – out of love for him. And Darth Vader is seeing this display of love, and what do you think is going through his mind as he lays there thinking, he could have killed me, and I deserve it, because I was trying to kill him! And now he is going to die so that I can live?”

My Luke says, “He must feel very loved.” I said, “I bet he does.” The drama only intensifies from there. The evil Emperor comes down, and says, “So be it. Jedi.” (Said with condescending disgust.) “Only now, at the end, do you understand. If you will not turn to the dark side, then you will be destroyed.” It was, in truth, the Emperor, who was not understanding that a plan of Redemption was unfolding right before his very eyes. This master of evil was unable to see the conflict boiling up within his apprentice, Vader, whose murder he had just ordered – a plot that had been foiled by love. The Emperor bellows to Luke, “Your feeble skills are no match for the Power of the Dark Side!” When in truth, this act of sacrificial love by this young Jedi would prove more powerful than all this powerful master’s evil schemes!

And then the Emperor begins to electrocute him with that powerful blue lightening from his fingertips. Darth Vader rises and keeps looking back and forth between his son who is suffering in agony and this evil leader who is killing him realizing he has a choice to make. Save his son or stay with this evil Emperor, who would have had his son kill him. I’ve always wondered if this was when Darth Vader woke up and realized he would be replaced as soon as his leader found a stronger Number Two, despite Vader’s fierce loyalty. 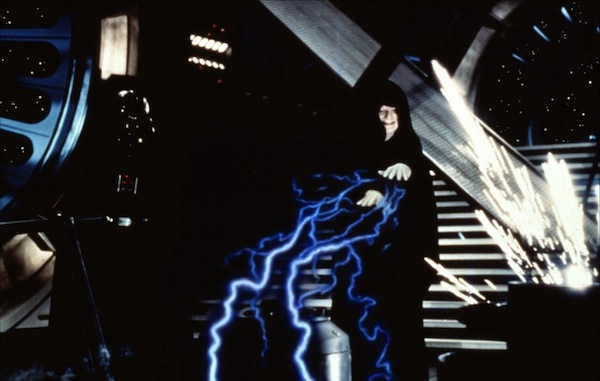 The Emperor pauses, only for a moment, to say, “And now, young Skywalker, you will die.” During the final burst of lightening, Darth Vader looks back and forth a few more times, as if to antagonize the suffering audience some more, before making his choice. Finally breaking from his frozen state of inaction, he bursts into motion, lifts up the Emperor and tosses him over a railing and down into a reactor shaft where he falls, wailing as he plummets, until, finally, he dies.

Not only is Luke saved, but Darth Vader as well. When Luke says, “I must save you,” Darth Vader answers, “You already have.” Vader does not physically survive the ordeal, perhaps due to his battle with Luke or the lightening when he lifted the Emperor, but his redemption comes from his choice to save his son and turn back to the good side, and the evidence in the world of Star Wars, is his being seen with Obiwon and Yoda at the end of the film in their ghostly jedi forms from the after life. Indeed, the faith and love of a son, brought salvation to a man everyone else thought was unreachable. 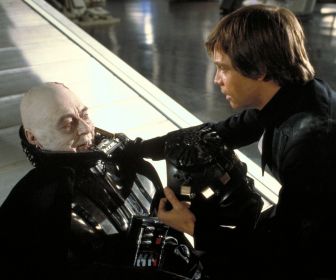 I’m not really a science fiction fan – I enjoy other science fiction films, but the reason I love Star Wars is primarly the story of the Redemption of Darth Vader. There is a lot more to it than I even have gotten in to in this post. (Note that fact that Darth Vader could sense Luke’s presence on the Moon of Endor and the Emperor could not! The Emperor asked, “How do you know he is there?” Vader answers, “I sensed his presence.” – “Strange that I could not,” responds the Emperor. Not strange at all, he didn’t love Luke!)

Greater love has no one than this: to lay down one’s life for one’s friends.

I may pretend to have Jedi powers when I open automatic doors at the grocery store or open the garage door, but the truth is I am powerless. And I’m not a righteous person. I’m not even a good person. But God’s demonstrated his love toward me by having his Son lay down his life for me. He could have killed me for my sin – I deserve it as much as Darth Vader, for disobeying God. There is no one righteous enough to merit salvation. The real evil Emperor, Satan, has invited me to rule my own life at his side – but Jesus defeated him on the cross, dying in the process, for me. 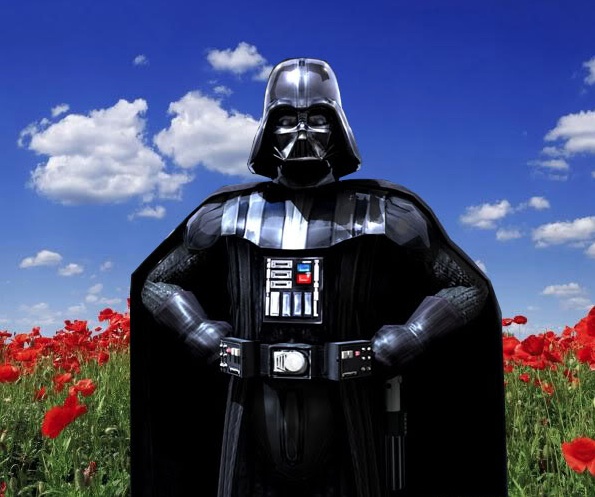 Star Wars teaches us that there is NO ONE beyond hope. There is good in everyone – and we ought never give up hope on anyone. Love can conquer anything and anyone and that evil will ultimately be defeated by the Power of Love.