Perhaps she thought it was a joke, or was just being nice, but she accepted the rambling invitation to her first date with me, granted four years in the future, and I began counting the days!

Finally, the date arrived, and we had our first official date in the United States! September 7th, 1990 finally arrived! I could only afford a one way limo ride to the shore where we went for a dinner cruise at Navy Pier in Chicago – however, it was not the place it is today. It was an empty freight yard with only one ship! (I’ve had to work closely with Mayor Daley to get many much needed improvements though for my annual date!) 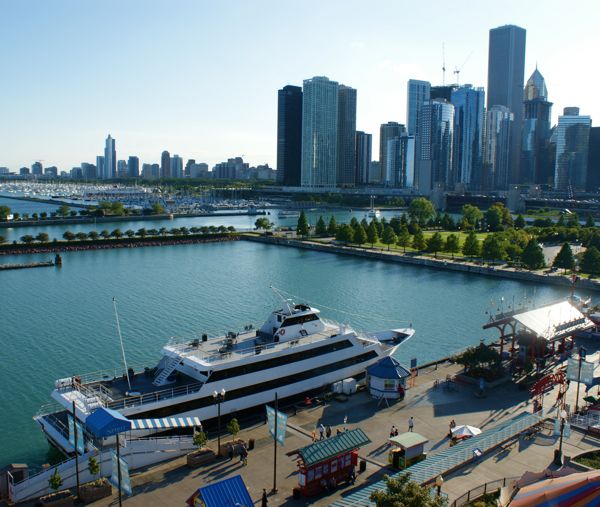 The Spirit of Chicago, now completely remodeled and relaunched a few years ago tends to be our boat of choice, though we like the Odessey too. The Anita Dee II was a HUGE disappointment… unless you want to be the only sober people on board. (Tip: The Entertainment Book has a buy one get one free for Spirit of Chicago, worth twice the entire book cost!) 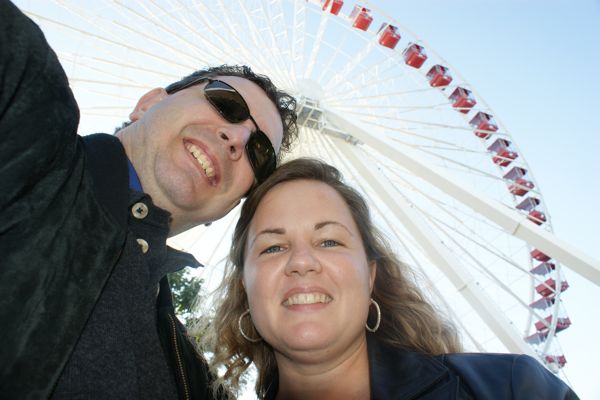 A few years ago McDonald’s added a pretty cool Ferris Wheel, that for years was only $2, but eventually they got greedy and realized the same number of people would probably pay $6 to ride it, so they trippled their income. But it goes slow and the view is pretty nice. (the picture of the boat above was taken from the ride, as was this view of the Shakespeare Theater w/ shadow of the Ferris Wheel) 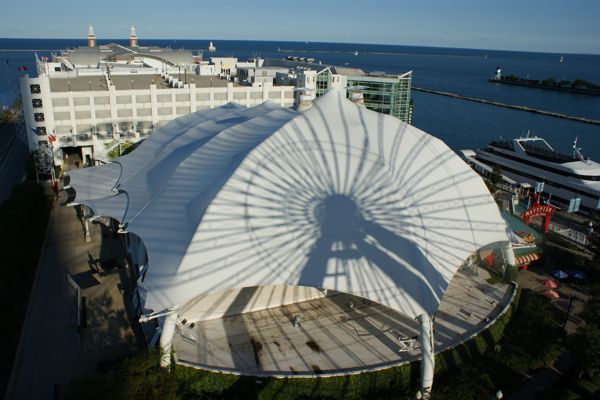 The cruise is usually around three hours and has the best view of Chicago! One year the weather was so bad we never left the dock and another year the waves were so high the huge roast fell and rolled across the floor. Oh, and there was the year a small boat got crushed during docking…. ooops. But hey, out of 19 years you gotta have some excitement! 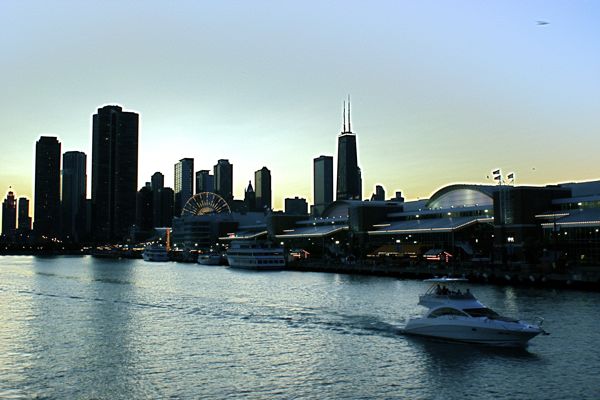 We now head down early to enjoy Navy Pier before heading out to sea… er, out to lake. 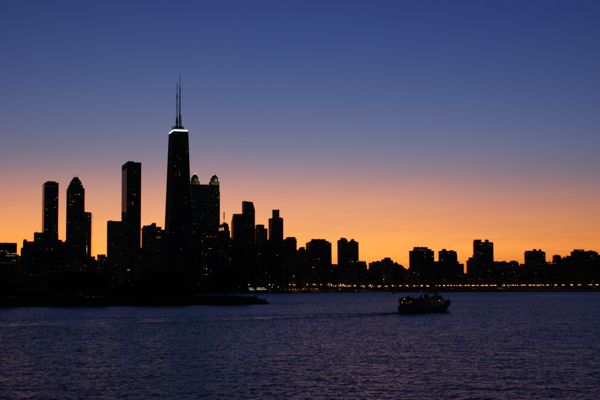 Then the sunset comes and the sky starts to glow. (I didn’t edit this picture at all) 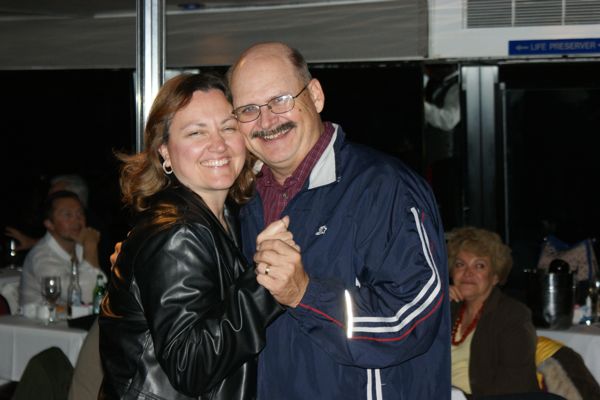 We often make some new friends. (like the Phillipinos last year) This year we happened to sit next to a pastor and his wife, celebrating 30 years of marriage, Larry and Michele Mosher of Tinley Park. We were enjoying some nice quiet conversation when suddenly the DJ picked Michele and I for a little “skit” we had to act out! 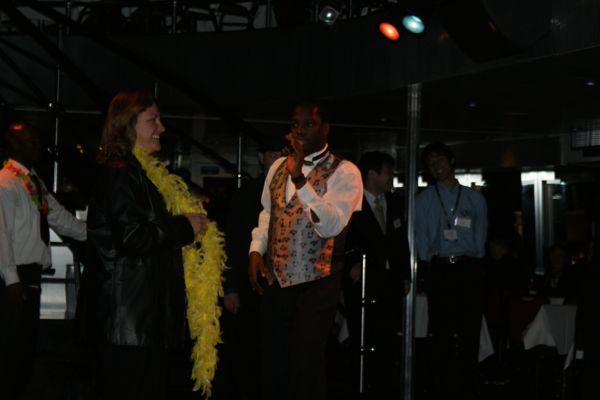 She was told that she was now a showgirl named “Lola” and I was her lover. Another guy got a gun… which was bad news for me… 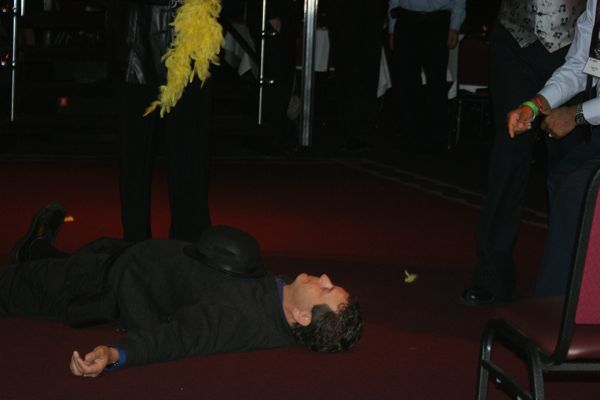 I wound up dead and she unhappy for the rest of her life. I’d never heard the song before, but perhaps you’ve heard it, “Her name was Lola, she was a showgirl…” It sounded familiar but I’d never heard the words before until we had to act out what we heard.  I was dying to get out of it. Turns out, I did! 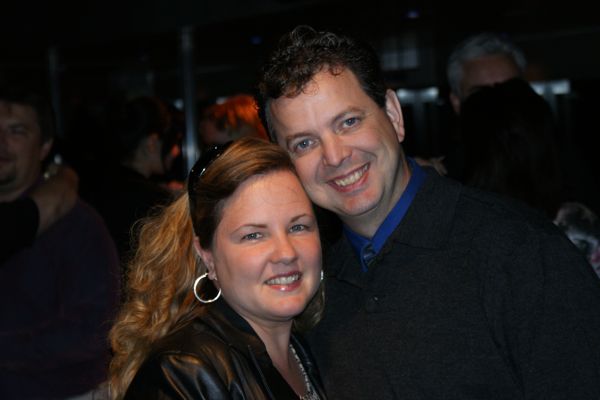 It was a fun evening, hard to believe it was our 19th cruise! (or that next year will be 20!) At least it didn’t rain like last year! 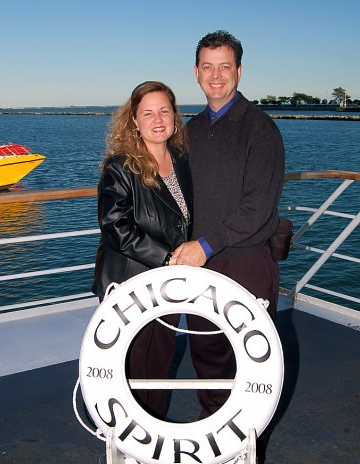 One of the highlights is that every year they take a picture as you board, so this is our 19th boarding photo! Next year we will put all 20 together and make a flip book of us getting older! First, we have to FIND them all! Hopefully we can get them all in order! But it’s been a really neat tradition.

Here’s to 19 more! Though maybe it will be a levitating hover boat by then!