I was invited to be a special guest again at Cherry Hill Community Church, where they have a wonderful children’s ministry. Whenever you are given the opportunity to teach at Christmas time, it presents a unique challenge. You are, of course, teaching the greatest story in HIS-Story – but it is also a very familar one. So how do you tell it in a new and creative way that will still engage children who can easily “check out” when they start to hear the familiar parts of the story. I searched my computer for countless ways I have addressed Christmas in over twenty years as a children’s pastor – and then walked into my vast kidmin prop warehouse and started seeing things that could be used to tell the story! At the same time, as I prayed about it, I was wanted to elevate the story above the mere facts of the traditional story to WHY did God sent Jesus? The story is truly epic and transcends the birth of Christ from the origins of time all the way to Christ’s Resurrection all the way to today!

Then it hit me! Why don’t I tell the ENTIRE STORY OF CHRISTMAS FROM CREATION TO TODAY!

I know, sounds crazy. But I’m known for crazy ideas. So I sought out to bombard the children with an onslaught of props to capture their eyes and engage their imaginations and begin with eternity past, creation, the problem of sin (yes, you can get philosophical with kids!) carry it through to Christmas, explain several of the rarely taught truths of Christmas such as why did the wise men know about the star (from missing writings of Daniel in Babyon) to the fact that they were not even at the stable as is often depicted! And then carry the story through Easter and then through to it’s conclusion today by presenting a child from the audience with the same choice Adam and Eve had – only a forbidden gumball from a gumball machine instead of a forbidden fruit from a tree!

I ended up with four trunks of propped, a few tables and a lit up star up on a pole! 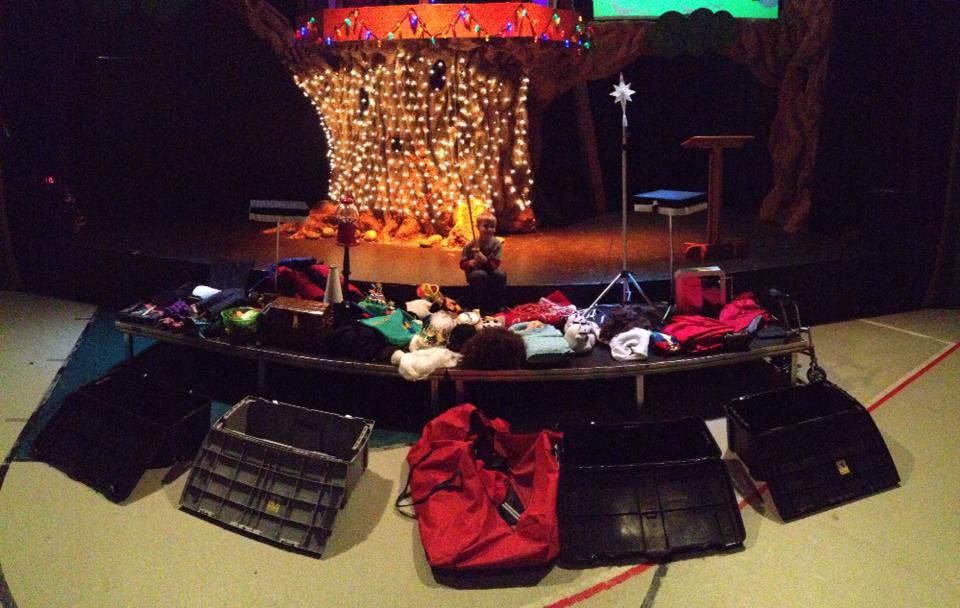 The kids enjoyed it and leaders even told me they learned some things they didn’t know! By the end, included were God, Adam, Eve, Satan (Snake), Cain and Abel, Noah, Moses, Prophets, Mary, Joseph, Caesar, George Bush, King Herod, Wiseman (just one), David, Solomon, Daniel, Shepherds*, Angels, Simeon, Jesus (baby and grown), Mary Magdalene and Mother of Jesus, Disciples, Roman Soldiers Angel and… and a boy from audience to represent today. (My son!) I think that’s everyone I covered!!

(And yes, my son was the boy who helped at the end. He did a great job!)

Note: I included a bit of the Cherry Hills opening to show how they do it, since they do such a great job and model how to start with a bang and lead into the teaching time with songs that start out upbeat and fun and gradually get more slow paced. It is a model of how it should be done. (I edited out their welcome time, it is extremely well done, but didn’t want to put visiting kids on YouTube without permission.)

There was A LOT to put away at the end! I didn’t even USE all the stuff I brought, later I kept seeing objects and agonizing, “Oh, I forgot that!”

This is a panorama, so click to view full size.

What have YOU done to bring the Christmas Story ALIVE for your kids?

*Note: I think during this second service recording I left out the shepherds… oops!