Movie Review: Where Hope Grows – in theaters May 15th 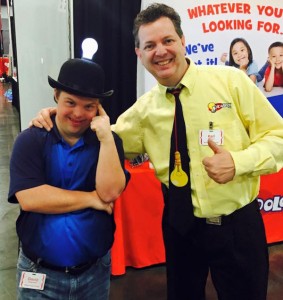 I’ve had the privilege of meeting and hanging out with David Desanctis several times this year. He is quite the character and a lot of fun! Plus, he is a movie star!

I had him auto-graph one of the movie posters for me for his first major motion picture Where Hope Grows coming out in theaters May 15th. 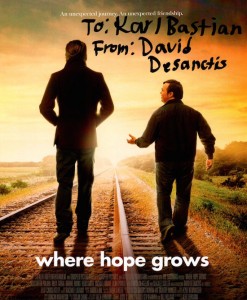 We even had fun trying to re-create the poster: 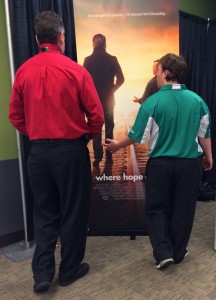 David pulled some strings for me, and I got to see a pre-release copy of the film. The entire family say down and enjoyed our “sneak peek.”

I highly recommend this film for adults. It is about the journey of an alcoholic to find healing through a unique God-ordained friendship. But need to caution up front that it is NOT for children. One of the very first conversations is between the single father and his daughter about sex and there is, of course, heavy drinking, plus adultery, and some violence including an attempted rape scene (with little consequence to the boys doing the attack). So we had to at times distract my son and ultimately, remove him from the room.

But with that said – there is much to enjoy for adults. It isn’t a comedy or light story, but there are light moments as the main character’s life is transformed through a friendship with a downs syndrome young man named Produce, who works at the local grocery store. Hugs lead to thoughtful conversations and eventually an unconditional friendship from which many lives are impacted.

It is a story of life transformation. While I would have liked a clearer Gospel message – it seems the goal of the film was not evangelistic as much as the power of friendship, the breaking down of stereotypes of kids (and adults) with special needs, and the hope that God offers when one is willing to open up to Him. The Bible is a visible hint that there is more to life.

Let me encourage you to see the film, not only for the impact of the film itself, but to encourage more films of this nature through solid box office receipts. We need more films that show life as it truly is for many, and that offer hope beyond the empty promises of a world that seeks pleasure and adrenaline-saturated films top mask inner pain and that do nothing to impact lives.