Are Storm/Clone Troopers Good or Evil?

I got an e-mail today from a boy named Josh, who asked me:

Karl, were storm or clone troopers ever good ? I think they were good in the second movie but my dad says they were always evil. From Josh

It’s a great question! Sorry, Josh, but your dad, (who will remain safely annonymous on Alderann), is wrong. In fact, it is such a good question, I decided to post my answer here: 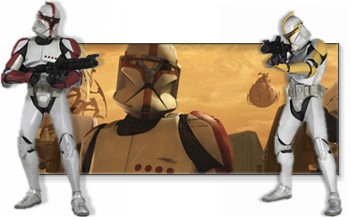 When I met George Lucas at the Star Wars Convention, a kid actually asked him whether the storm trooper are good guys or bad guys. His answer was, “They are good guys who follow orders from a really bad guy.” That is the shortest answer, but rather simplistic, but good enough for the little kid who asked. But there is more to that question, and unfortunately, George Lucas is still confused on what he believes about right and wrong. But there is more to the question that I’ll attempt to answer here. (non-Star Wars fans can stop reading here)

Here is my a-little-bit-longer answer:

It is important to know that there are two types of troopers. (very different and the difference is significant!) 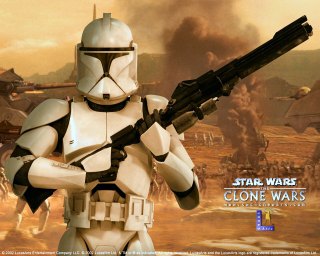 The first is “Clone Troopers” which are not human, they are clones. They are like machines with flesh. They look human, but do not have what makes people human: a soul. They know nothing of good and evil, so are they are neither good nor evil by themselves, just as a pizza is neither good nor evil. (unless it has veggies on it, but I stray) They are like machines that simply do whatever those in charge say. 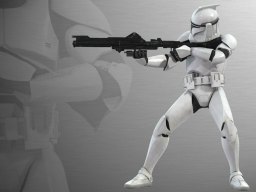 You are right, in Episode II they seem ‘good’ since they fight on the good side, but that is only because they are taking orders from the Jedi. (who are good) However, the clones were actually created by the Sith and given to the Jedi to encourage the war, so that makes them tools of evil in the hands of good men! Remember, the Jedi didn’t even know they had ordered a clone army, but were quick to use it once they had it. The Sith were creating the war and arming both sides in order to gain power – so in that sense the clones were bad too, the Jedi just didn’t know they were being used to spread the stakes and scope of the war. 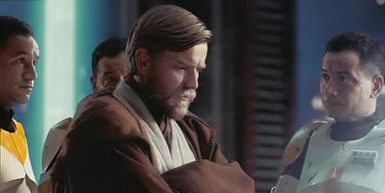 In Episdoe III you see the clone troopers go from good to bad, but that is only because Palpatine gave them evil orders (to kill the Jedi). So you see, the Clone Troopers are neither good or bad, it is their ACTIONS that are good or bad depending on who is giving them the orders. The clone trooper, Cody, is given a name (rather than a number) because Obi-won has befriended him (spoiler coming!). One second he is being friendly and giving him his light saber back, and the next moment shooting at him. It is because he knows no better, he simply follows orders, and doesn’t feel anything – guilt, shame, or regret, over the orders. One minute they are friends, and the next not, which proves they never were friends to begin with, they are incapable of genuine friendship. Clones have no power to ‘CHOOSE’ which is the #1 thing that makes humans special and in the image of God. It is our freedom that makes us unique from all other creatures. Our freedom has made a mess of the world, but has made a real relationship with God possible. Had God made us clones, there would be no sin, but we could never really know him either. See why God made us free, even though evil results? 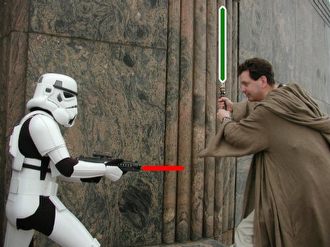 Me fighting a storm trooper at the EP2 Premeir.

The other type of trooper is “Storm Troopers” and they ARE human, they replace the Clone Troopers before Episode IV – unlike the clone troopers, they are morally responsible for their actions, and in that sense they are guilty of doing evil because even though they are following orders, they know what they are doing. That is why many of them flee the Empire and join the republic, because they can tell the Empire is evil and does evil with its power. The Rebellion wants to restore Good people to power. It is kinda funny that ‘rebellion’ is usually wrong, but when the authority is wrong, rebellion becomes right. Crazy world huh, where being a rebel can be good!?!? (KIDS: This doesn’t mean it is ok to rebel against your parents! They would have to be asking you to do something against God’s will for it to be ‘good’ for you to rebel!) 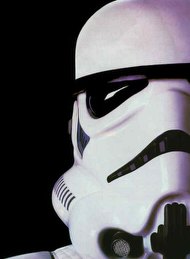 I hope I didn’t confuss you too much. That is the medium length answer, if you’d written to Star Wars Insider magazine, you’ve have probably gotten a whole artilce about it!!!! Pages and pages!!

So what is the lesson in all this?? There actually was a good line in the mostly boring movie “Kingdom of Heaven” – where the king says to a young up and coming knight something to this effect, “You will be judged for your own actions, not by whether you followed orders.” The point being, we are morally responsible, and so YOU MUST DECIDE whether an action is right or wrong NO MATTER WHAT the ‘authorities’ over you say. If they are wrong actions, just because you were told to, does not make it ‘right.’ Even if you get in trouble, or lose the ‘battle’, better to do what is right in God’s eyes. HE is the ultimate authority. Later in the movie, the same king, who is dying, offers the young knight the throne and offers to kill his rival, give him the rival’s wife, and kill any men who will not join him. The knight reminds the king of his own advice, and turns down the throne (!) because it would be wrong to kill the rival, even on the king’s orders! He shows he would rather not be king, than become king in the wrong way. Not many people could turn down wealth and power just because the way to get it was wrong.

BOTTOM LINE: Are you a clone trooper, storm trooper, or rebel? A clone, doing whatever you are told without thought, or a trooper, following orders even though they are wrong, or a rebel, saying, “I’ll fight for what is right, even if it costs me everything!”

May the Force be with you!