Home Adventures Crippled for a Week! (and counting)

Crippled for a Week! (and counting) 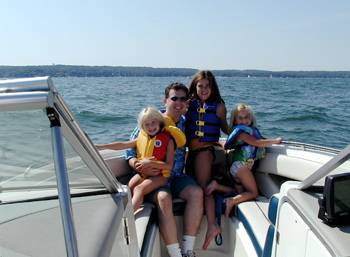 Labor Day 2005 – I can’t remember a better one ever, and this one ended up in the Emergency Room! (Yes, with me getting shots and stiches!) A family in my church invited Sara and I to go out on their boat on Lake Geneva (WI) for some fun boating, swimming, eating in town, tubing, and bleeding. ;) Well, ok, they didn’t invite me to bleed, but oh the memories! 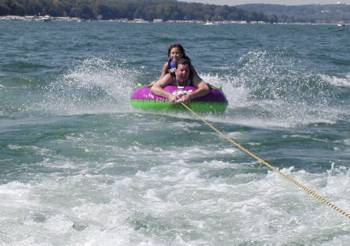 I had never ‘tubed’ like this before. WOW! What fun! As I always say, “I have a new hobbie!” (Though I’ve said that about many things I’ve only done once!) But the tubing was a blast and I went with the eldest of the three adorable girls. If you want to see me eat water, watch this: WIPE OUT! (QuickTime 7MB) This was before the accident. 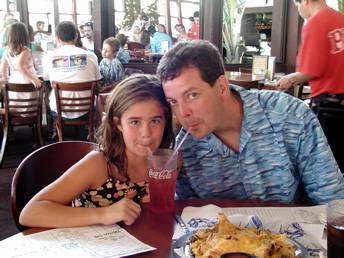 Then it was in to town for lunch with my cute date. :) Ahhhh, isn’t that romantic? :) (not pictured, the bandages and stains on the carpet.) 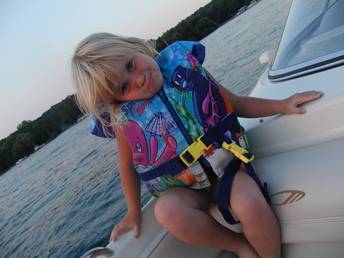 Each of the girls is a sweetheart! Bundles of fun, energy and laughter! 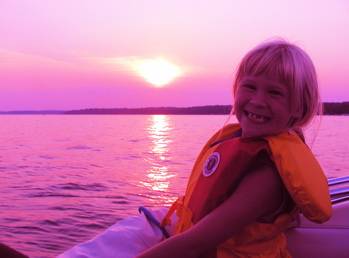 When sunset came, the view was wonderful. (By this time, the bleeding still hadn’t stopped) 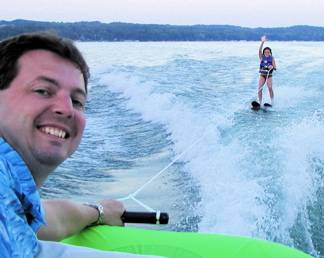 My highlight (besides bleeding) was holding on to this future water ski professional, as she gliding over the water for her best personal time, over five minutes! Those who know her might enjoy watching her ski, (5.5 MB QT) the rest will probably be bored, but, hey, it’s my blog, and I’ll post it if I want to. :) 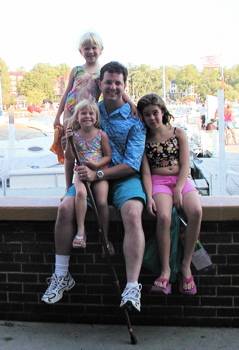 Here we are in town. (I’m the guy with the $20 walking stick!) Yes, was still bleeding at the time of this photo. 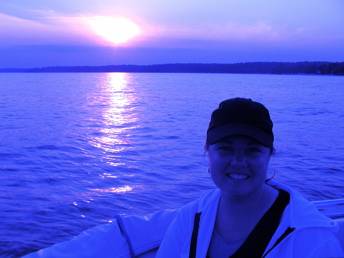 Which is more beautiful… the sunset or the wife? Hmmmmmmm 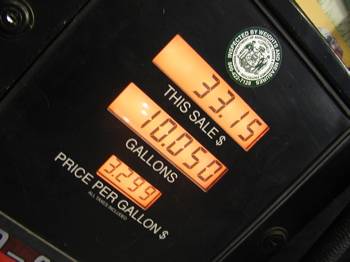 Of course, gas prices soared along all roads to Lake Genva… and then dropped again on Tuesday!

Oh, you are wondering about the ‘accident?’ I am still walking with a cane (well, Moses’ staff) a week later. I’m been telling the kids I was attacked by a hoard of ninjas, and that they are all now recovering in the hospital – but the truth is I slipped while jumping off the boat and managed to put a hole in the bottom of my foot (left heel) on a boat cleat. (For you non-boating people like me, that is the Thingie-You-Tie-The-Ropes-To) After treading water for five minutes acting like I wasn’t in pain, (assuming it would eventually subside), I climbed out of the water and discovered my left foot covered in blood. (Sorry for you fainting types out there) That would explain all the fins that had started to circle me in the water! Captain Dad whipped out the first aid kit and I wrapped it up, but it kept seeping red stuff (avoiding the word ‘blood’ for all you faiting types out there) all day. Once you are hurt, everyone suddenly becomes a medical expert – even strangers – so I finally gave in and went to the ER on the way home (it just had to be right on the way!) – and turned out everyone else was right and I was wrong – it was ‘serious.’ So one tetanus shot, one metalic band-aid, one shot INTO the wound, two stiches and six stickers later, I was headed home from the best labor Day ever.

The irony of all this limping and cane walking – is that the VERY NEXT MORNING I had to be on an air plane to the Billy Graham Center in Ashville, NC to speak at the School of Evangelism. My highlight there was meeting Ron Hutchcraft!

Well, actually, I had met him once before in high school – actually was on the radio with him. He used to do a program called “Sunday Night Live” that was recorded at WMBI (Chicago) with live studio audiences of higher schoolers. My youth group got to do it once, and so I met Ron then. I’ve always admired him, enjoyed his speaking, and loved his concise way of saying the most profound things. Hearing him speak in person, and having lunch with him was a blast. He is a very funny guy. When I told him I had admired him since I was a youth, his answer was, “And in other news, archeologists have discovered my high school.” After limping on stage to address the audience, when I returned to my seat, he leaned over and said, “How beautiful are the feet of those who bring Good News, or is it, how injured are the feet?”

Well, enough rambling. Last Sunday was our KICK OFF SUNDAY and I still have a ton to do. But I’m excited to be back into the Fall Sunday Routine! (and yes, it is still bleeding) :)

Oh, the answer to the question is: WIFE!