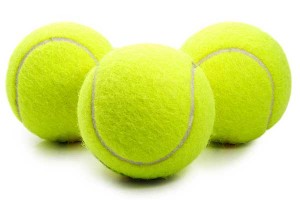 OK, this post isn’t really about tennis balls, it’s about my grammy, but I knew that title might generate some curiosity and therefore some clicks!

I am Thankful for My Grammy! (and Tennis Balls… keep reading!)

I do not mean to elevate any relative above any other… I am thankful for ALL my relatives, and love them all differently and in different ways. But my Grammy B will always hold an extra special place in my heart. One of those reasons she and I kept secret. It wasn’t until after she passed away, that I finally let the secret out. In fact, at her grave side service, they let the children draw on her casket, and I drew a tennis ball on her casket with the words, “I win.” Relatives looked at me a little confused (and perhaps slightly shocked!) Here is why. One of my “Kidologist Secrets” of relating to kids is to have fun games or “inside jokes” with the kids who I love. It makes them feel special – and let’s them know they are more than just another kid to me. They are unique. They are one of my favorites. I’ve always had a running joke that I was my Grammy’s favorite of her nine grandchildren. Of course, I assumed every grandchild believed that! But it was a theory I loved to humorously defend. In fact, at my grammy’s wake, in one of the photo albums featuring full sized photos of her grandkids, when I discovered I was on page one, I proudly declared, “See!? I was her favorite!” and was greeted with groans and rolled eyes.

Imagine my surprise when during the memorial service my father read a note written by my Grammy where she wrote,

“To set the matter straight as to my favorite grandchild, not withstanding Karl’s claims to whit – I loved all my grandchildren the same.”

Everybody laughed. I had no idea my claimed to favoritehood had gained Grammy’s attention to the point she decided to set the record the straight in her service! It was all in good spirit, and the teasing I got afterward was well deserved!

But there was a reason I felt extra special I can now reveal that I shared during the service that began some thirty years ago, and that applied to children’s ministry and what I mentioned as I began…  the power of secret game that makes a child feel extra special, even for thirty years!

When I was ten years old I saved up my money and bought my own ticket to fly from California to Indiana to spend a summer living with my grand parents. (I did this several times actually.) During the first visit they set up a room for me in the basement that became my home-away-from-home. And I loved these stays with Grammy and Grandpa! I went to Cubs games with Grampa and learned to sew from Grammy. (That Garfield puppet was the beginnings of making puppet costumes, though Grampa didn’t really approve of that.) I went downtown Chicago on the train with Grammy often and in the evenings watched Columbo and played Rummy – a card game. However, one of my ways of entertaining myself was to toss tennis balls at the stairs in the basement like a pitch back and one time I left them on the stairs and later, Grammy gave me a very gentle scolding not to leave them on the stairs lest she step on one and fall down the stairs. But the next day, I accidentally left all four on tennis balls on the stairs again. Instead of just scolding me, she instead humorously reminded me by saying that she thought my tennis balls were out to get her as they looked like they were coming to get her, because they were higher up the stairs this time, each on a separate stair, and I’d better lock them up, because obviously, I couldn’t have left them there, since she told me yesterday to put them away after I played with them. I played along and said I had put them away and that they must be alive. (I said it in a way that she knew I wasn’t lying, I was playing along.)

The next day, to keep the joke going, after I played with the four tennis balls, I remembered the kind way she had reminded me, but instead of putting them away, I put them in the kitchen, at the top of the stairs, four in a row, across the kitchen, as though they were “alive” and heading toward her room. Instead of her making a joke about it, she simply moved them later, placing them four in row in the basement heading toward my room.

This began an unspoken joke, that lasted thirty years. All that summer, the tennis balls continued to be placed, when the other wasn’t around, four in row closer and closer to the others room, until they were in each other’s bed. Then in our clothes, and then finally just being hidden in places we were sure to find. When I finally flew home, I found the tennis balls packed in my luggage. Grammy assumed the game was over. Little did she know!

When I returned the next summer, the tennis balls returned with me! Any time I came to visit as a young college man, a tennis ball was hidden in her home. I once lived with her for a summer in college and the tennis ball war was resumed though we never spoke a word of it! When she came to visit me, as a young married man, soon after, I would find a tennis ball somewhere in my house. Even as she lived in different states around the country, and me too, the tennis ball war continued, often with years between the secret placement, though over the years, it had at some point gone from the original four to just one strategically placed tennis ball. Many times we simply had to just buy a new one. It didn’t matter. It was more about leaving a tennis ball behind. It was our way of saying, “I love you, you’re special.” It was Grammy’s way of saying to me, “You’re still that little playful boy to me, and you always will be.”

I’ll look at tennis balls and cry sometimes now and people will think I’m nuts. But you will understand. A silly yellow ball holds a lot of love for me. All because my Grammy decided to be playful with a child, and then just decided never to stop. And people wonder why I thought I was her favorite. I’m O.K. with all her grand kids thinking they were her favorite. They all were, in different ways.

The same can be true in your kids ministry. You can have favorites. EVERY kid can be convinced that they are your favorite. And they can all be right!

People ask me all the time what’s the secret to connecting with kids. Have you figured it out yet? YOU are the secret. (Originally Posted this story in September 2010 as Hiding Tennis Balls)