Connecting Digitally with Your Kids 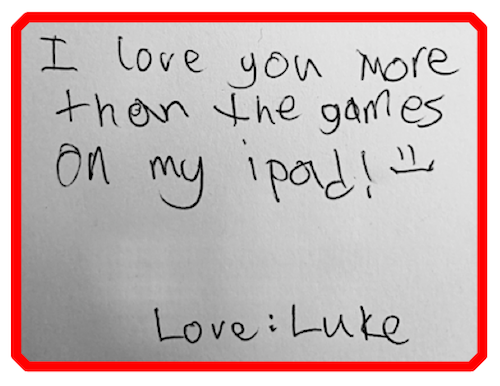 For Father’s Day my son cracked me up when he wrote in my card, “I love you more than the games on my ipad! :)” So touching.

But the reality is, my son is growing up in an age where he plays on an ipad as much as he does with physical toys and games. I’m delighted that Lego still captures his imagination as much as Minecraft, and that he’d still rather play outside than on his X-box, but at the same time I have a love-hate relationship with iPad games.

There are times I wish he didn’t have one – but I also realize that touch-tablet technology is the world he is growing up in. While he can use the family iMac with ease, it is very likely that by the time he is a teenager, the computers we use will be the technological dinosaurs of a past age. I enjoyed growing up using the very first personal computers and leaping on each advancement as they came out. Even waiting in line for a new Apple OS to be released instead of the free downloads of today.

But this ‘Old Dog’ has to recognize that both the reality of this new digital age as well as it’s dangers. Attempting to block, ban or restrict technology would be a pointless gesture that might make me feel better, but would leave my son ill equipped for the world he will be living in. Did you know that YouTube, not Google, is the #1 search engine used by children? Luke would rather watch cartoons like The Amazing World of Gumball or America’s Got Talent on YouTube than on the TV. Why? He has more control. No commercials. He can pause, repeat, skip or move on if it doesn’t capture his attention. He doesn’t even watch movies in order after having seen one once. Why when you can just skip around to the parts you like the best? While this drives parents crazy hearing the same jokes or songs over and over, it is a reality in the “on demand” world of our kids. And we wonder why kids seem more impatient nowadays?

Plus, in his world, knowledge is always accessible. No need to read a book or go to the library. In fact, no need for an Internet sazearch, just ask Siri or Alexa and get immediate results spoken back to you. A.I. was once the stuff of movies only, but today, he even turns to these gals for humor and refers to them as though they are part of the family, often forgetting their limits.

Luke: “Alexa, what the weather outside?”

So how to we engage with our kids during this Digital Age? How do we embrace while also addressing our concerns for our kids innocence and safety?

This is the reality: Our kids are growing up in a digital age. Our job is not to judge, but to join. As in all ages throughout time – the technology never is the issue, it is how it is used. Our job is to equip and train our kids how to use it in a way that honors God, to protect them from mistakes that can result in unwanted influence and to join them so that it is something we model, coach and demonstrate how to use wisely. You will get more opportunity to train when you are there with them, then if you just talk about it remotely.

How are you engaging with your kids and technology?